Latest News
You are here: Home1 / Press release2 / The Condemned Who is Innocent: Zheng Xing-Ze－After Ten Years since the ... 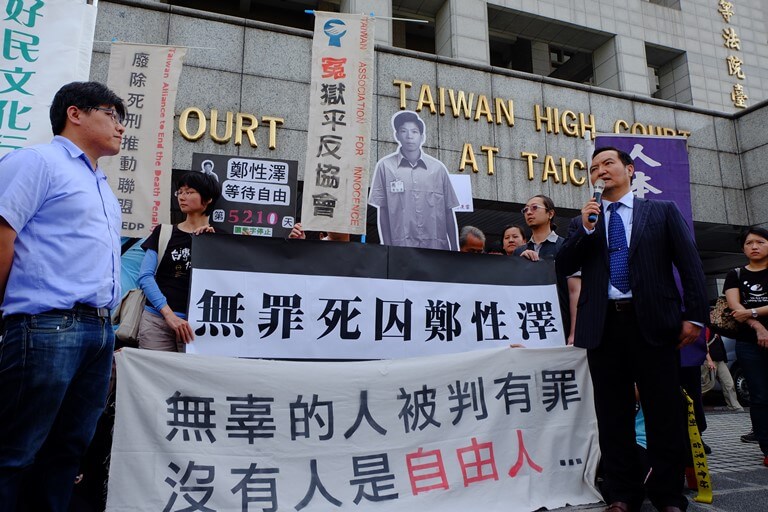 After Ten Years since the Final Judgement, It Was the First Time that the Court Came on Trial for Him

For Approval of the Retrial, It Is First Time for the Court to Hold a Trial for the Defendant Who Was Sentenced to Death in the Final Judgement

The Taichung High Court approved for the retrial which was requested by the Prosecutors Office and lawyers for Zheng’s case. It was for the first time both prosecutors and lawyers engaged to file the retrial in interest of the condemned. Taichung High Court summoned Zheng on April 12 at 14:30. Also was the first time for the Court to hold a trial for the defendant who was sentenced to death, for the approval of a retrial.
The main purpose of this trial was to let the prosecutors and lawyers explain the reasons for applying for a retrial and let the victims’ family express their thoughts.

Prosecutor: Zheng Should Be Judged as Innocent

In the court, the prosecutor of Taichung High Prosecutors Office said that after the final judgement, Zheng initiated the post—conviction reviews many times; his lawyers also applied for the retrial and the prosecutor general filed an extraordinary appeal for him. In the end, nothing worked. However, after Article 420 — Code of Criminal Procedure was modified, it broadened the conditions for retrials. In addition, it hadn’t used forensic science evidences earlier, so the prosecutor entrusted Department and Graduate Institute of Forensic Medicine in National Taiwan University to do so.
The prosecutor specially pointed out there were no witnesses that directly confirmed that somebody gave the Clock gun to Zheng and there were no objective evidences to prove if Zheng shot or not. Thus, it only used the oral—confession evidences to judge him. According to the analysis of the position, the direction and the timing of Luo Wu—Xiong and Su Xian—Pi were shot, as presented by the Department and Graduate Institute of Forensic Medicine in National Taiwan University, the court should release the accused.

Defense Team: the Oral—Confession Analysis of Judicial Psychology Showed that His Confession has a Higher Possibility to Be Wrong

The prosecutor of Taichung High Prosecutors Office applied for the retrial on March 18 and Zheng’s lawyers did the same on March 31. This was the fourth time for lawyers to file the retrial since 2011. The prosecutor’s new evidence for the retrial was the reconstruction of crime scenes and based on this, the person who shot wasn’t Zheng. And for the lawyers, they asked judicial psychology experts to analyze the confessions that were made before the accused was questioned by the prosecutor and police. In addition, the experts reviewed the environment when Zheng was being questioned, the personality of Zheng and the content he answered. From the above points, they thought the confession made by Zheng about the crime has a big possibility to be wrong and it cannot be considered.

Lawyer Luo Bing—Cheng: Considering the case of death sentence, there is no possibility to return, so the trial should be started again

In the court, Coordinator of Zheng’s duty lawyers group, Luo Bing—Cheng expressed that they already had the reconstruction of crime scene and oral—confession evidences, so it accorded with the condition of having new evidences for a retrial. According to the comment about the new laws for retrials by the Supreme Court: [When evidences are doubtful, judges should make a decision that benefits the defendants]. As long as we have a reasonable doubt about the original and final judgement, we should start the retrial. Needless to say that this is the case about death penalty. If it is wrongly executed, it is impossible to rectify. So we should broaden the conditions for retrials. Both prosecutors and lawyers applied for the retrial, it was enough for us to have a reasonable doubt about the original and final judgement：[Two positions from where the police was shot]

Lawyer Chou Sian—Jhih: An innocent person is in prison for one more day; the country will have to bear the cost one more day.

Lawyer Li Xuan—Yi: Miscarriage of justice should be corrected; courts, prosecutors and lawyers should respect the judicial system

The member of Zheng’s duty lawyers group Li Xuan—Yi said, “Prosecutors and lawyers both applied for the retrial; hope our judicial system does not misjudge any innocent people. And this specially shows the value of judicial practitioners. In the court, he also said, “Zheng had been kept in the jail for 14 years; we, both the prosecutors and lawyers are here together for the same purpose. Now we hope the judges are by our side as well in order to avoid the critical mistakes and retain the dignity of judicial system.

After ten years, it was the first time that Zheng got an opportunity to defend himself in the court on his own. Zheng expressed that he didn’t take the gun and shoot the police and his confession was made because of the torture given by the police. Zheng also requested the prosecutor to stop his execution and let him free as soon as possible.

The Taiwan Alliance to End the Death Penalty found the unjust case of Zheng Xing Ze in 2010, and since then it started the rescuing movement along with Taiwan Association for Innocence. Following immediately, other groups that focus on the human rights and Zheng’s supporters joined the movement that Included Taiwan Association for Human Rights, Judicial Reform Foundation, Humanistic Education Foundation, Taiwan Democracy Watch, and Taichung Culture Action and so on. In addition, Zheng’s family members and his high school classmates also attended the court sessions to support him. Therefore, Zheng Xing Ze’s support group was found formally which stood with Zheng to fight to prove his innocence.

Zheng’s younger brother: Hope my brother is let free as soon as possible

Zheng’s mother and his younger brother attended the trial that day. His brother said that the prosecutor having already considered Zheng wasn’t the murderer, hoped the court would release his brother as soon as possible.

Lin Xin—Yi: An innocent person is made to be guilty; nobody is an exception

The CEO of Taiwan Alliance to End the Death Penalty, Lin Xin—Yi said that she contacted Zheng after the final judgement in 2006 and knew that he believed he was innocent. The writer Zhang Juan—Fen found some queries about his case, enquired lawyer Luo Bing—Cheng to analyze it and assumed that Zheng indeed was innocent. Gradually, Taiwan Association for Innocence was found and it made a rescuing group to save him. We are glad that Taiwan Association for Human Rights, Judicial Reform Foundation, Humanistic Education Foundation, Taichung Culture Action and other groups all together supported Zheng Xing Ze.
Lin Xin—Yi said, “Support group for Zheng Xing Ze has been established and we would keep fighting for Zheng”.

Qiu Yi—Ling: The truth should be clarified and let Zheng Xing Ze be released as soon as possible

The member of Support Group for Zheng Xing Ze and the secretary—general of Taiwan Association for Human Rights Qiu Yi—Ling attended the proceedings to support Zheng and indicated that Su Jian—Han, Zhuang Lin—Xun and Liu Bing—Lang had to wait for 21 years to be set free. Jiang Guo—Qing had no chance however to get his freedom and for that reason hoped at least Zheng wouldn’t have to wait anymore and could be free as soon as possible. Qiu Yi—Ling also said that she felt sorry for the death of the police but the truth should be clarified. “Hope the court can allow the retrial and let Zheng be a free man”.

Li Xuan—Yi who is the defense attorney for Zheng and the executive committee of Judicial Reform Foundation referred that Judicial Reform Foundation and Taiwan Association for Innocence kept emphasizing the importance of forensic science earlier and also the new assessments could prove the innocence of Zheng. “Hope forensic science would be valued more in the future”.

Zheng Xing Ze has waited for the freedom for 5210 days; let us stop counting

After the appeal against the final judgement was rejected by the Supreme Court on May 25th of 2006, he kept insisting that he was innocent and didn’t give up the hope. On April 12th, the 5210th day of Zheng’s imprisonment, the Support Group for Zheng Xing Ze provided the letter that Zheng had written to the chief prosecutor, Yan Da—Han. In the letter, Zheng had thanked Yan Da—Han for applying the extraordinary appeal in favor of him. He had also thanked the prosecutor of Taichung High Prosecutors Office for applying for the retrial and had hoped the prosecutor would stop the execution before the retrial and release him as soon as possible.

｢No One Can Be Treated Like This｣ Understand the Case of Zheng Xing-Ze and Support Him
Wrongful Conviction Day 2015, TAI urges to Stand up for Jin-Kai Lu

｢No One Can Be Treated Like This｣ Understand the Case of Zheng Xing-Ze and...
Scroll to top