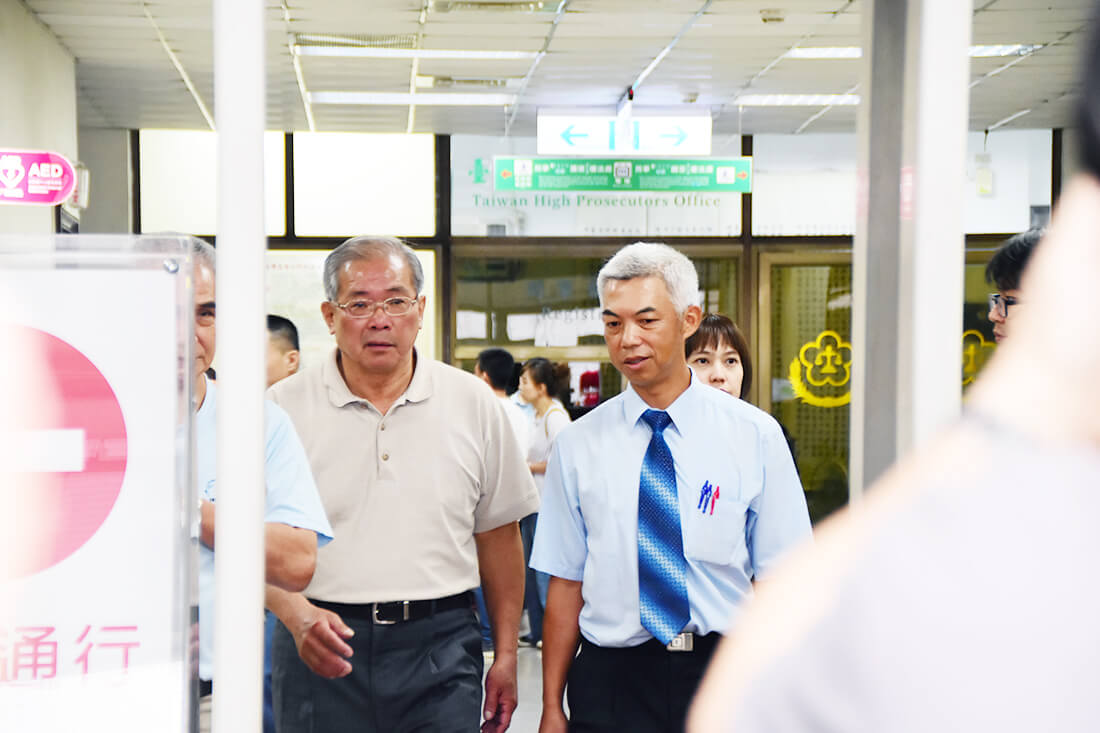 Su Pin-kun (蘇炳坤) slowly walked down the hall of the Taiwan High Court and took a seat outside the courtroom. It was the first hearing since the Supreme Court on Feb. 8 affirmed the constitutionality of having a retrial for pardoned defendants.

“The judges found me guilty in this exact courtroom all this time ago,” he said to the bailiffs, who were listening intently.

Su recounted the painful memories of getting tortured by police more than 30 years ago.

“They waterboarded me … and did all kinds of terrible stuff to me,” he said.

“I am turning 70 next year. Much of my life is in vain. My career is destroyed. Only so many years remain for me. All I want is justice, a pronounced innocence,” Su said as he became emotional.

“Do you know who the judges were for my previous trial?” Su asked the bailiffs standing outside the courtroom, and proceeded to name the three judges from his immaculate memory.

As it turns out, being able to remember what happened almost 30 years ago is an overarching theme of this court proceeding.

In 1987 Su was sentenced to 15 years in prison after being wrongfully convicted of robbery and attempted murder. Instead of turning himself in, Su lived in exile under the protection of a district attorney until he was arrested while visiting Chang Gung Hospital in New Taipei City’s Linkou District (林口) in 1997.

Insistent on receiving official recognition of his innocence from the criminal justice system, Su last year filed a motion for retrial with the help of the Taiwan Innocence Project (台灣冤獄平反協會). The motion was eventually granted by the Taiwan High Court and affirmed by the Supreme Court the following year, after the government’s appeal was dismissed.

Su’s case is an extraordinary one in Taiwanese legal history in a number of ways. In addition to being the first example of the Supreme Court granting a retrial to a defendant who has already received a special executive pardon, Su’s case epitomizes an important issue that the criminal justice system has yet to fully confront: police use of torture.

The police allegedly tied Su to a metal bar, stripped off his clothing, waterboarded him, rang an airstrike siren against his ear and repeatedly kicked him in his waist. While less common today, these practices were frequently used in the 1980s.

There was an evident sense of history in the making in the courtroom on July 2. Uniquely, both the defense and the prosecution acknowledged Su’s innocence of the alleged crimes.

Kuo is Su’s former employee, who while being interrogated falsely named Su as his accomplice in a jewelry store robbery. Like Su, Kuo was coerced into making a false confession after being tortured by the police.

Peng is the owner of another jewelry store and allegedly bought the stolen necklace and bracelet from Kuo.

The inability to recall information about what happened more than 30 years ago was a thread that ran through both witnesses’ testimonies.

In sharp contrast with Su, Kuo repeatedly stated that he was unable to remember the specifics of what transpired.

Despite this, attorney Greg Yo (尤伯祥), a member of Su’s defense team, was able to bring out critical information about the torture inflicted upon Kuo and Su.

When asked by the prosecutor how Kuo knew that Su was being tortured even though he did not witness it firsthand, Kuo said: “He was screaming so loud.”

Having a lapse in memory is only natural. One might even argue that being able to recall exhaustive details about what happened more than 30 years ago raises more red flags.

However, for Su, all minutiae of the torture that he suffered through were etched in his memory.

Perplexed by Kuo’s inability to remember details about how he was tortured, Su confronted Kuo emotionally during questioning. Members of Su’s defense team repeatedly touched Su’s forearm to comfort and calm him down.

Sitting down after demanding an explanation from Kuo, Su took off his glasses and wiped away his tears. After more than 30 years, Su still held Kuo accountable for the life he was deprived of.

“How can one forget what happened after receiving such horrible treatment from the police?” Su said.

It is important to remember that although Kuo holds a pivotal role in Su’s wrongful conviction, Kuo is also a victim of police torture.

As Yo stated after the hearing, “there is not just one victim in this case, but two. Both Su and Kuo are victims of regrettable police practices from a dark period in Taiwanese history.”

Su’s display of emotions inside the courtroom exemplifies the difficulty in navigating the emotional terrain after getting pardoned and is indicative of the larger ramifications of the loss of time and depravity of trust in the criminal justice system.

This erosion of trust and disillusionment with the system has been mitigated to a degree by the support that Su has received from his family, friends, defense team and members of Taiwan Innocence Project.

Walking out of the courtroom, I caught glimpses of tears on the faces of Su’s family members. Su’s brief and yet emotionally charged remarks toward the end of Kuo’s testimony were taken to heart by his family.

So often when one examines the far-reaching influence that a wrongful conviction has on a defendant, one overlooks the emotional burden and pain that the defendant’s family bears. The time Su lost with his family was simultaneously time his family lost with him.

As one begins to consider compensation for exonerees, these less forthright factors should also be examined.

Laws regarding monetary compensation to exonerees rely on rudimentary calculation of the number of days they spent in the criminal justice system. Not only does this scheme completely overlook the emotional trauma they experience and the loss of time, but it also disregards the harm that wrongful convictions inflict upon their families.

Su’s path to justice has certainly been a lengthy and arduous one, and remains ongoing. Perhaps it would have been easier for Su to walk away from his unfortunate tragedy after being pardoned and try to leave his suffering as a distant memory. Yet, the 69-year old remains steadfastly committed to clearing his name and having his voice heard.

Su’s commitment has already resulted in several noteworthy achievements: a historical legal precedent to allow pardoned individuals to have their day in court, and increased attention on police torture and extortion.

With the trial coming to an end tomorrow, the court’s declaration of innocence is the only thing that continues to elude Su. Regardless of the result, his tenacity has made his voice heard by many, and there is no doubt that Mr Su Pin-kun will be remembered for years to come.

Stephen Hsu is a senior at the College of William & Mary in Williamsburg, Virginia, where he studies Sociology and Economics, and an intern at Taiwan Innocence Project. Brian Tratner is a law student at Columbia University Law School in New York City interning at the Legal Aid Foundation.

After fighting for 32 years, Mr. Su Pin-Kun(蘇炳坤) was finally exonerat...
Scroll to top