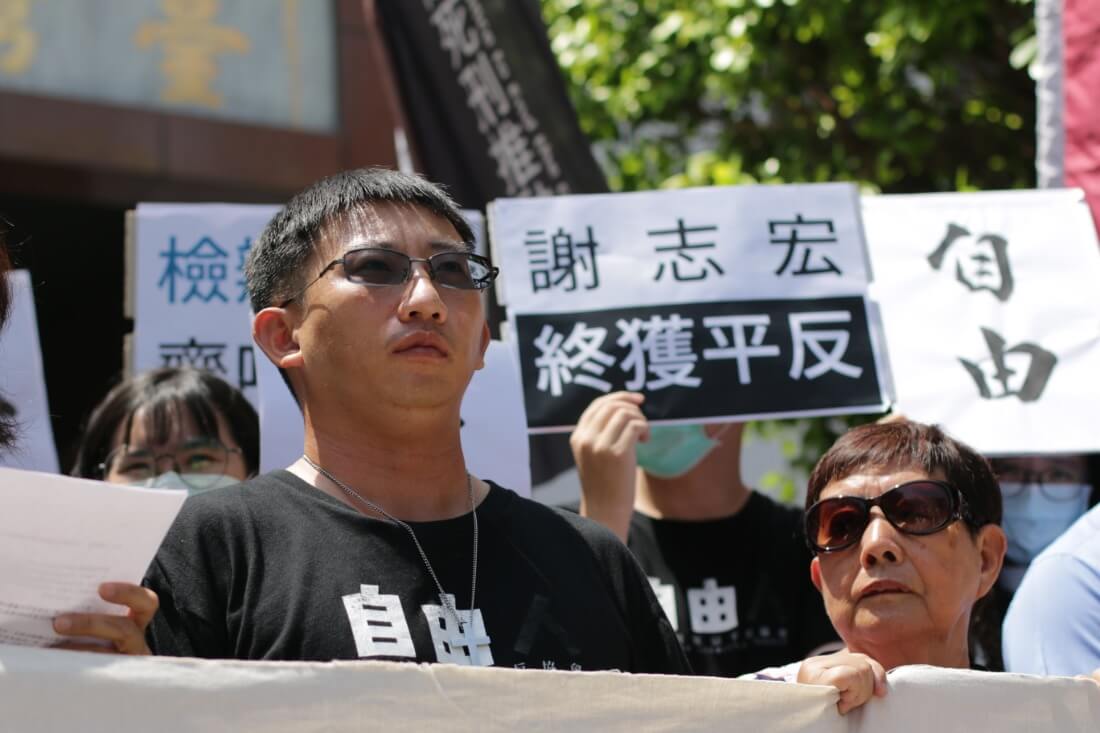 In 2018, there was significant progress in the Hsieh Chih-Hung case. On July 11, the The Control Yuan filed a criminal special relief procedure to raise five questions in this case. Prosecutor Lin Zhi-feng of the Tainan Branch, Taiwan  High Prosecutors Office then restarted the investigation.

Prosecutor Lin discovered some new materials that the police who dealt with this case before did not unveil them to the court. Those new materials included Hsieh Chih-Hung ’s handwritten whereabouts and Kuo Junwei ’s portrait, etc. At the same time, Prosecuter Lin was back to the crime scene and found there were many controversial points in this case. Therefore, a formal retrial request was filed in September. This is the second time in Taiwan’s judicial history that prosecutors have filed for a retrial in a death penalty case. Lawyers for Hsieh Chih-Hung also proposed a retrial in October. As a matter of fact, citing the comprehensive judgment of the new evidence and reexamining the previous evidence, the High Court Tainan Branch, on March 14, 2019, believed that Hsieh Chih-Hung could be acquitted or have a more favorable judgment. Therefore, the court ruled that the case should be retried and immediately stopped the defendant’s sentence.

In 2000, Kuo Jun-wei and Hsieh Chih-Hung went out for a joyride. And  meet a Ms.Chen on the street outside a convenience store and invited her for a ride. Chen agreed, but they quarreled on the way.Kuo threatened the victim with a butterfly knife and requested sexual intercourse. The victim agreed. Kuo bring Chen home and had sexual intercourse with her. Later, Kuo, Hsieh and the victim later went out for a joyride. In the beginning, Chen said she wanted to go home, but later she changed her mind and said she wanted to find other boy. Kuo became impatient and stabbed the victim with his butterfly knife for 48 times.

And then, Mr.Chang, a farmer, witnessed the incident Ms. ChenChang, was also killed. The verdict concluded that Hsieh Chih-Hung had participated in murder, and stabbed Ms. Chen and Mr. Chang and sentenced both Kuo and Hsieh to death in 2011.

Grounds for verdict of innocent

Second, Kuo Jun-wei’s confession about how the defendant killed Ms. Chen and Chang Qing-mu was inconsistent with the evidence. In addition, Hsieh Chih-Hung only spent one or two minutes with Ms. Chen alone all night. Although Kuo Jun-wei passed the polygraph test, the inconsistency with the objective evidence and the identification of antisocial personality disorder on Gio’s side showed that Kuo Jun-wei’s testimony against Hsieh Chih-Hung was not credible.

Third, the report stated that Kuo Jun-wei was incapable of killing Ms. Chen alone, and the depths of knife wounds were different. Number of perpetrators was inferred to be more than one, therefore, Hsieh Chih-Hung was found guilty. However, this kind of report could not be concluded to the above result.

Forth, there was no positive evidence in the whole case, such as identification of blood stains, to prove that Hsieh Chih-Hung was involved in the case.

After leaving the court, Hsieh Chih-Hung bowed to the courthouse to express his full gratitude. In his speech, he said he had received assistance from many people, especially his family and lawyer, Tu Xin-cheng. He thanked to the people supporting him for not giving up, and also thanked to the lawyers and many non-governmental  organizations for their assistance and support. He appreciated that under the support of all parties, he finally can get the result of acquittal. His mother also came to the scene to hear the judgment, and expressed her gratitude to the community. “I always believe that Hsieh Chih-Hung is innocent” said by his mother. After 7262 days, Hsieh Chih-Hung finally received the delayed justice.