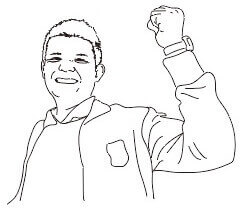 In December 2013, Taiwan High Court granted Chen Long-Qi. a retrial based on new DNA Evidence. Chen became the first person to be granted retrial since the Taiwan Association for Innocence was founded in 2012.

On March 24, 2009, two escorts were raped between 4 to 6 AM in a warehouse that Chen and his friend rented for business usage. The victims failed to identify the assailants due to alcohol intoxication.

Chen always maintained his innocence during the investigation and trial. He claimed that he left before the crime took place to pick up his wife, Ko, at her workplace. Ko’s timesheet corroborated Chen’s defense. An eyewitness also testified that Chen was not at the scene. Despite no testimony linked Chen to the crime, the district court and high court found him guilty of gang rape with the other two co-defendants. The decision was solely based on a 17 Y-STR DNA test (see figure1.), which concluded that Chen “cannot be excluded “ from the semen stain found on one of the victims’ underwear. Chen was convicted of gang sexual assault and was sentenced to 4 years in March 2013.

Chen sought TAI’s help right after his conviction. He refused to serve his time. He told his lawyers that “Unless they drag me in, I will not voluntarily walk into jail for something I did not do.” He divorced his wife, worrying that his daughters would have to go through psychological consultation and labeled as “daughters of the rapist” in schools. He sold his seafood stall and hided in a small apartment that his wife rented. “For many times, I looked down the street from the window of the apartment, thinking that if I should jump to end this nightmare”.

TAI consulted Prof. James Lee Chun-I of the Department of Forensic Medicine, and Prof. Lee confirmed that, he can only tell from the 17Y-STR test that there are two or more perpetrators committing the crime. However, he needs the electrophoretic graphs of the original DNA testing to see how many people were actually involved. Chen’s lawyers then filed an application to the forensic lab for the graphs. The lab replied that they a court order is required to provide the graphs. Chen’s lawyers therefore submit a motion for retrial to the Taichung High Court, citing the lab’s reply as a proof that there is an evidence not noticed by the fact-finders in the original trial. ( To fulfill the “new evidence” threshold, the evidence needs to satisfy the “new” and “sufficient “ standards. According to the precedents, it requires the evidence to be (1) existent back in the time of the original trial, but not known to the fact-finders or the defendant, and (2) sufficient to challenge the original verdict.) The court held a hearing and put the DNA analysts on the stand. They testified that there are electrophoretic graphs in the lab. However, they suggested that since they got a new machine this year that can do a more precise 23 Y-STR test using the original sample, a retesting using the original sample would be more convincing. The court hence ordered a retesting, which showed that Chen “can be excluded” from the DNA sample collected (see figure 2).

Based on this new piece of evidence, the court granted his motion in December 2013, and Chen was exonerated on March 26, 2014. He is now a volunteer for TAI, and he’s going to initiate a civil suit against the State.

(1) Ineffective assistance of counsel
→ Chen and D3 share the same lawyer, who paid little attention to Chen’s defense.
→ Ko’s timesheet corroborated Chen’s words, but this piece of evidence was never brought to the district court.
→ Did not put the DNA analyst on the stand.
(2) Confusing wording used in the DNA Report“ cannot exclude≠ consistent with ≠ match
The DNA analyst conducting the original 17Y-STR test failed to provide the information about the actual number of the accomplices.